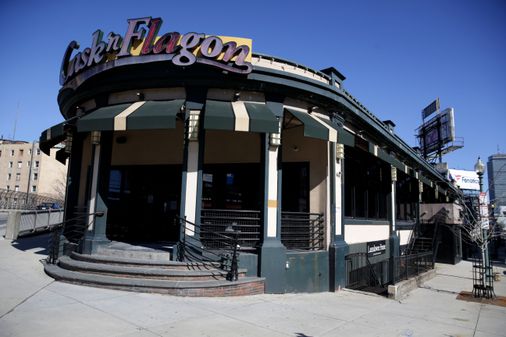 But with public consumption of recreational pot banned under state law, the proliferation of marijuana shops in these busy areas raises an obvious question: Where are all those Red Sox fans, P-Town ferry day-trippers, tourists staying in smoke-free hotels, and college students in dorms supposed to actually use the stuff?

Many neighbors of the forthcoming stores fear that crowds of customers — more than 20 percent of the state’s population used marijuana at least once in the past month, according to Department of Public Health research — will simply light up on the sidewalk or the beach, or duck into the alleys and side streets outside their windows, becoming an odorous nuisance. (And of course, the practice is already routine in some places, as anyone who has walked through Boston Common can attest.)

State Senator Julian Cyr, whose district includes Provincetown, believes there’s a better way. He has proposed a bill that would authorize “social consumption” venues, or licensed cannabis lounges, in a small number of communities that volunteer to host them, finally providing visitors (and renters whose landlords ban marijuana use) a place where they can legally consume cannabis.

Cyr said the idea should be seen as practical, not radical. After all, he argued, if Massachusetts banned bars but permitted numerous liquor stores, would anyone be surprised when otherwise law-abiding Bay Staters inevitably drank in public?

“I pretty much know that at some point this summer, the Provincetown police chief is going to call me and say, ‘This is an issue,’ ” Cyr said. “What we’re trying to do here is anticipate what we know could be a problem, and I think social consumption [venues] will do a much better job of addressing nuisance issues and promoting public health than the police giving people $100 tickets.”

If the bill passes, lounges selling marijuana for on-site consumption would be regulated by the state’s Cannabis Control Commission. The agency has already approved a pilot program that includes detailed rules around their operation, including ventilation requirements, consumption limits, a ban on taking products home or bringing in outside pot products, and mandatory training for servers. Officials have said they would at first authorize the establishments in a maximum of six communities, then adjust the rules based on feedback from local leaders, residents, and businesses before possibly making lounge licenses available more broadly.

Under Cyr’s bill, cities and towns could join the program through a community referendum or by passing a bylaw or ordinance; a number of communities, including Provincetown, Somerville, Springfield, Holyoke, Amherst, and North Adams, have already expressed interest.

Proponents say that lounges, in addition to providing a safer and more discreet venue for marijuana consumption, would represent another step toward ending the criminalization and stigmatization of cannabis, putting the drug on a roughly equal footing with alcohol, as voters demanded in 2016.

They also hope the facilities will help prevent evictions for smoking pot (especially for medical cannabis patients in public housing) and create gathering spaces that nurture the state’s nascent cannabis culture. Eventually, an after-work vape session with colleagues at a lounge will be as unremarkable as an after-work beer at a bar.

“We’ve been programmed to believe this a criminal, deviant act, and that’s going to continue as long we keep forcing people into the likelihood of surreptitious public consumption,” said Tashonda Vincent-Lee, a marijuana advocate and event planner. “No one thinks someone who drinks one beer is an alcoholic or lost control of their life, but that’s the kind of disdainful and turned-off attitude people get if they smell someone smoking in public. It’s time we addressed that gap.”

Communities in several other states, including California, Alaska, Colorado, and Nevada, have already moved to permit social consumption venues. In Massachusetts, the only such business to date — Worcester’s Summit Lounge — operates in a legal gray area, with its owners saying the facility is a private club where dues-paying members are allowed to consume cannabis they bought elsewhere.

In 2017, the cannabis commission initially envisioned a more wide-ranging social consumption program that included event licenses (think, weed weddings) and permits for businesses such as yoga studios and movie theaters that might want to offer marijuana edibles. But the agency soon retreated from the plan amid criticism from the administration of Governor Charlie Baker and others, who feared it would distract regulators from building the foundation of the recreational market — cultivation facilities and stores — while possibly causing an uptick in stoned driving.

Cyr conceded that the bill could again face an uphill political battle, after a similar proposal went nowhere last legislative session. Still, he is hopeful that lawmakers can be convinced the facilities are worth a try. One angle he is emphasizing is that the lounges would create significant economic opportunity for disenfranchised entrepreneurs, since the commission has voted to make the licenses available exclusively to equity and economic empowerment applicants — essentially, those most affected by the drug war — for three years.

“Social consumption would provide an avenue for truly small and local businesses to participate in what so far has been a highly corporatized industry,” Cyr said.

Some local officials have taken preemptive steps to prevent public pot smoking. In Boston, for example, licensing authorities required Redi, which is slated to open on Boylston Street near Fenway Park, not to sell single joints and asked New Dia, which will open directly beneath the Cask ‘n Flagon bar, to submit more detailed plans for handling game-day crowds, after the Fenway Civic Association and others raised concerns.

Victor Chiang, Redi’s co-owner, said his company had committed to ongoing meetings with neighbors and would do everything possible to prevent public marijuana smoking nearby, including banning customers who are caught doing so.

But supporters of regulated lounges said it’s unfair and unwise to pressure pot retailers into becoming a kind of private anti-toking security force, or to use police resources on the issue. Policymakers should instead head off disputes between residents and cannabis consumers by permitting consumption facilities, they said.

“If you build it, they will come — and if you don’t, they’re still going to come,” said Mike Ross, a former Boston city councilor and attorney who helps cannabis companies navigate the local approval process. “We really need to prepare for this instead of just pretending it’s not going to be an issue.”