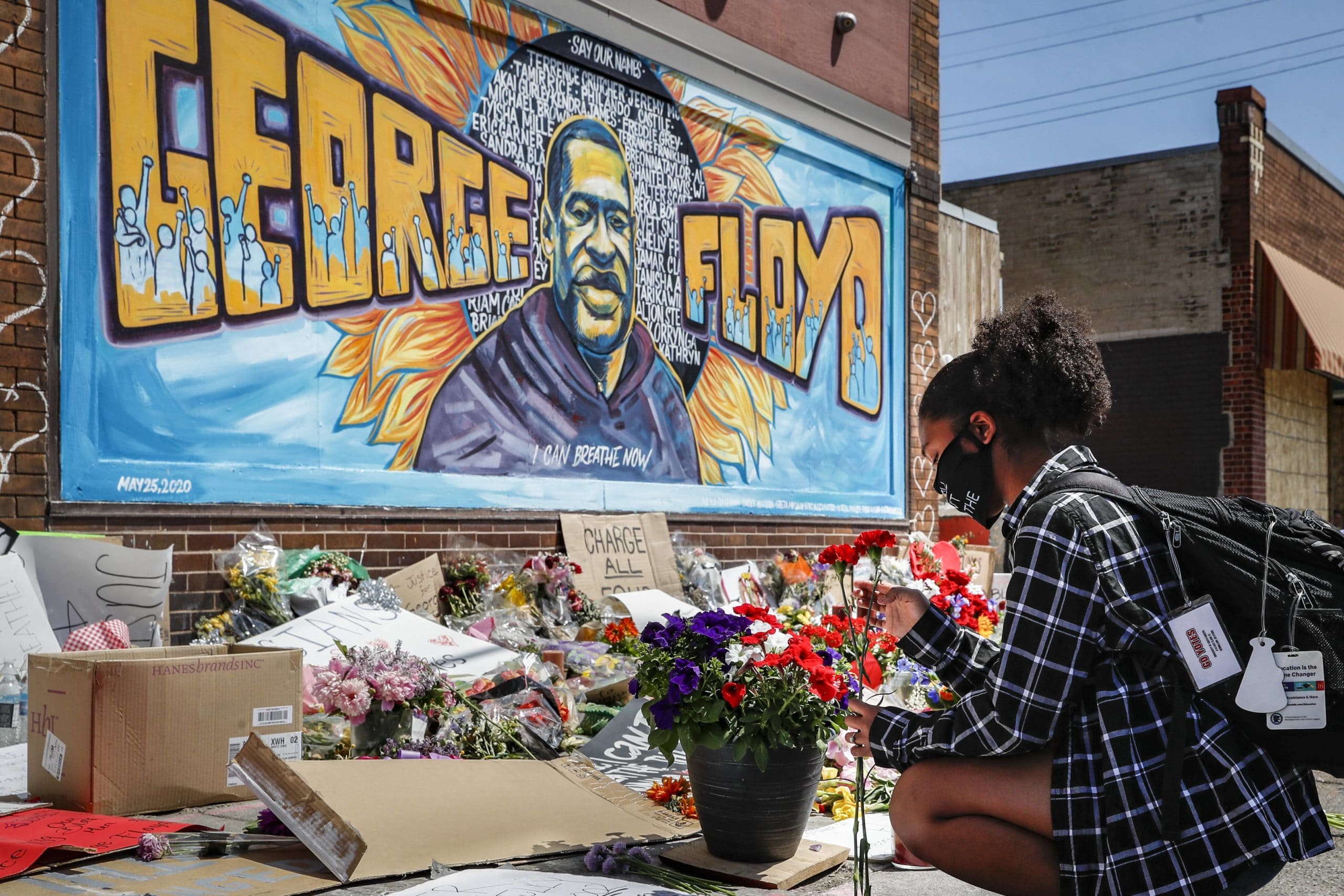 Local advocates are reacting to the conviction of former police officer Derek Chauvin for the murder of George Floyd. GBH All Things Considered Host Arun Rath spoke with Rashaan Hall, director of the racial justice program at the ACLU of Massachusetts. This transcript has been edited for clarity.

Arun Rath: So just starting simply, give us your reaction to the verdict.

Rahsaan Hall: This verdict brings rare accountability for police, and achieving this outcome for George Floyd and his family is only one step in addressing police abuse of power, disparate treatment and excessive force against Black and brown communities. So it’s one step in a long journey towards true justice.

Rath: If this is the beginning of a conversation and a process, not the end of it, how do you feel? Does this build some momentum for more action against systemic racism and police brutality? Is the wind at the back of the movement now?

Hall: It’s hard to say, right? Because what can happen is, people can point to the Chauvin trial and say, ‘Well, it’s fixed, we don’t need to do anything anymore.’ Meanwhile, there’s ongoing problems where police are not prohibited from mistreating communities of color over surveillance and disparities in traffic stops, misconduct, and excessive force against them. The amount of money that is spent on policing communities, particularly communities of color and poor communities, is out of proportion with the underlying needs within those communities that are serviced. And there still remains a level of lack of transparency and accountability. And so as much as this verdict is a potential indicator that there can be some level of accountability within this system, this is one of the most extreme cases, where a person was killed by a police officer on video while he was pleading for his life, with people standing around him pleading for his life. But we saw the same thing in the murder of Eric Garner, and still we have this case with Daunte Wright, who was killed by police officer, and Adam Toledo. So there’s the potential there, but the ideology around policing is so embedded in our society that it is a hard barrier to overcome.

Rath: You sense a danger of complacency — people could take the message of, well, the system works, he was convicted of murder.

Speaker 2: Right. But again, this is the low hanging fruit. There was an expectation that he would be convicted but for both the legacy of injustice and police not being convicted. But with all of those facts, absent this police officer, you would have that expectation. But what this doesn’t do is really open the eyes of this nation to the day-to-day type of policing that happens that does not have this type of accountability. This is the easy one.

Rath: Were you able to hear President Biden’s comments?

Hall: I wasn’t able to hear them.

Rath: I’m wondering, at the federal level — President Biden obviously won the presidency with the votes of a lot of people of of color. There is a Democratic Congress now, a razor thin majority in the Senate, but when we look to concrete actions that could be taken — the passage of the federal George Floyd Justice in Policing Act or other similar things — how do you feel about where things stand right now?

Hall: There’s always hope that legislation will be enacted that puts further restraints on policing and holds them to a higher level of accountability. But in reality, the true transformation of what we’re seeing, particularly in communities of color, is a reduction in the footprint of police. Police are engaged in way too many activities and are called to address too many issues that arise out of poverty, out of substance use disorder, out of mental health issues, lack of opportunity, and untreated trauma. The fact that we are relying on police to address those issues as opposed to investing in community to address those underlying needs suggests that we are going to continue to have these types of problems until we dramatically reduce the impact of or the footprint of policing. So, yes, we’re in favor of of legislation that further restrains what police are able to do and hold them to a higher standard, but reform for the sake of reform isn’t necessarily going to address the issue of violent, racist police.

Rath: I think a lot of people, maybe everybody of my age — our hearts were in our throats, because we think to 1992, right? When we had the Rodney King trial, what seemed like incontrovertible video evidence of brutality, and then we were just shocked by the acquittal verdict. Could you imagine that happening now? And what would have been the case if that had happened?

Hall: I certainly could imagine it happening now, and I can’t forecast what the potential outcome would have been, but I could certainly see people taking to the streets to raise their voice, to raise their dissatisfaction. But I could also see and am also currently seeing initiatives of people in local municipalities advocating and mobilizing around policing issues in their own community. The ACLU is working with a whole host of organizations that are trying to ban face surveillance technology by police, trying to reform qualified immunity, trying to get school resource officers or cops out of schools, trying to get greater accountability and transparency on pedestrian and traffic stops in different municipalities from Worcester to Brockton to Springfield to Lowell. So hopefully in the instance where the verdict would have come out as a not guilty, or guilty to one of the lesser offenses, that passion that would have driven people out to the streets would have translated into support for the myriad organizations that are doing this work to transform policing at a local level.

Rath: We have to note that not only is the whole situation, of course, not over, but the legal process in the George Floyd case is not over. Three other officers on the scene that day are set to be tried in the weeks ahead, they’re charged with being accessories to the murder. This is going to play out, I would imagine, in a different way, because these are not the individuals that had the knee on George Floyd’s back. What is your sense of how that’s going to play out? How the conversation is going to be, this secondary conversation, which is still going to seem extremely important, right?

Hall: I think part of it depends on how the media covers those subsequent trials. I think advocates and activists are going to continue to do the work of raising awareness and shifting the window of discourse on policing and trying to get people to invest greater funds in addressing community issues, because no matter how much we reform policing, police violence still happens because of the nature of the institution. In the event that there are acquittals in those subsequent trials or convictions to lesser offenses, I still think that there’s going to be a sense of injustice and disappointment, but it’s not going to be an unfamiliar feeling because we’ve seen it far too long in this country. So hopefully, again, people take that outrage, that passion, and that sense of injustice and support the work of the organizations in communities that are trying to reduce the footprint of policing and address the underlying needs.

Rath: From where you’re sitting, what are you now going to be getting hard to work on?

Hall: We’re going to continue to do the work of holding police accountable. We’re going to continue to advocate for law reforms to address overpolicing, ban facial surveillance, decriminalize the possession of drugs. We see this as a public health problem, but we continue to address it through criminal justice. We want to decriminalize BET-based driver’s license suspension. We want to ensure that the POST commission that was enacted in the law last year that certifies and decertifies police is engaged and up and running by its start date so that law enforcement officers who are engaged in misconduct are decertified. We’re going to continue to do the work of supporting advocacy organizations like Families for Justice as Healing in Boston, Defund Worcester Police Department, CAJE up in Lowell, to help bring to fruition the advocacy that they’re working on.