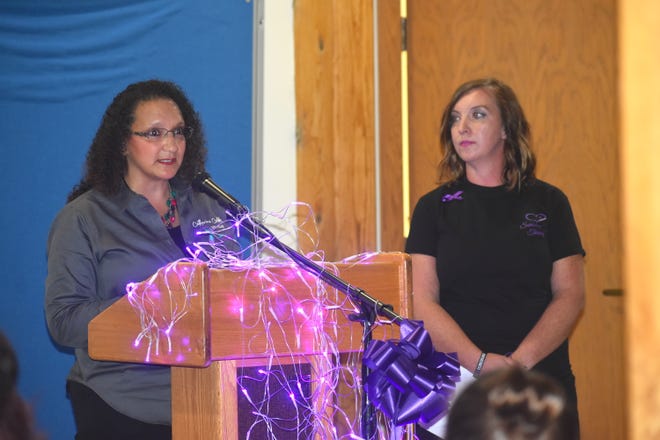 ADRIAN — Domestic violence does not discriminate based on race, religion, gender or economic status. Anyone can be a victim.

The Michigan State Police Incident Crime Report indicated that there were 64,778 victims of domestic violence in 2020, which is an increase of over 20,000 from just two years ago. Unfortunately, there is no way to determine how many more victims are suffering silently and not involving law enforcement, according to Adrian-based Catherine Cobb Safe House legal advocate Candy Gomez.

Gomez was present at the Lenawee County Commission’s Oct. 13 meeting to receive a resolution from Commissioner KZ Bolton, D-Adrian, declaring October Domestic Violence Awareness Month. The month is also recognized nationally. Although she sees it every day, Gomez said she still cannot believe that the number of domestic violence reports jumped by 20,000 in just two years alone.

“We do so much work within the legal system, within the advocacy services to really try to eliminate domestic violence by providing education to law enforcement and to prosecutors and to our attorneys and our survivors and just working toward system and social change. It’s just so sad that the numbers are so astronomical,” Gomez said.

According to the National Coalition Against Domestic Violence, one in three women and one in eight men will be affected by domestic violence.

Domestic violence is not just physical assault; it goes much deeper than that. It is the psychological abuse, manipulation, the installation of fear and coercion that survivors endure and none of that is against the law, Gomez said. But it is important to recognize the signs and to reach out.

“The perpetrator will look very charming and upstanding and hardworking but behind closed doors is causing indescribable violence,” Gomez said. “So that’s the challenge of what we’re encouraging is getting people to at least acknowledge it, to report it, for survivors to be able to report to someone that they trust.”

The Catherine Cobb Safe House is supporting action in the form of acknowledgement, reporting, prosecution and prevention, Gomez said. The prevention part is education so that survivors and the people around them can recognize the signs of domestic violence.

A survivor who wants to go by the name Chrissy spent several years in a toxic relationship with her husband who had sustained injuries at work and became addicted to pain killers and alcohol.

“He started drinking and the drinking got heavier and heavier, and it started with just a lot of verbal abuse, all that verbal/emotional. And then it would get to the point that he was punching holes in the walls, yelling, just erupting out of nowhere and there were some scary moments for my kids and I,” Chrissy said.

They tried rehab and counseling, and Chrissy and the kids went somewhere for a month, but the drinking returned and the abuse got worse.

“Things got to the point where he was erupting in my face, yelling, screaming, locking me out of the room, locking me in the room. Just random things like that were going on, and then he got up in my face,” Chrissy said. “I think my kids thought that he was going to punch me, so one of my kids ran up to get in between us, saying that they didn’t think that he would hit them. So that’s why they ran there. And that’s when I thought, ‘No, I’ve had enough.’”

That is when Chrissy started the legal process for separation. She had some videos that her attorney was able to use, and they had her husband removed from the house.

There were more sticky situations after that, but Chrissy is now on her own and her husband is on probation and out of state.

Another survivor who would like to be called Jewel was in a relationship with her husband for seven years. The abuse started only a week into the relationship and steadily got worse.

“The first abuse that happened was verbal and it was a week into the relationship. Over the years it turned into mental abuse, verbal abuse, emotional abuse and then finally physical abuse. About four years into the abuse, I had a vision and I know I thought in my mind of a quiet place where me and my dog could go without the abuse, and that’s what kept me surviving throughout the years,” Jewel said. “He would raise his hand to try to strike me and beat me and he would isolate me. I wasn’t allowed to see friends, family. I wasn’t allowed to be on the bank accounts. I never had any money. He kept control of everything.”

In August of this year, she decided to reach out to the Catherine Cobb Safe House. She packed a bag and hid it in her closet. When her husband returned home he found the bag, and things just escalated from there.

Officers came and arrested her husband. She packed up most of her belongings and her best friend came and got the dog. She then heard loud bangs on the door. It was her husband’s mother. She had come to physically hurt Jewel because she had put her son in jail. The police were called again, and they got the mother off the property, but she promised to come back once the officers left.

That’s when Jewel went and hid in the woods on about 300 acres of property at the home. She called her friend at 2:30 a.m., and she took her to Catherine Cobb Safe House.

“There were staff waiting for me. It was warm, and instantly I felt safe, and it was over. Inside I was screaming really, but in anguish really for fear of the unknown, but I was happy I was gone,” Jewel said. “I remember the first thing I ate was a can of vegetable soup and the first time I slept was like for four hours. … There’s now a restraining order. He’s fighting that and I have filed for divorce and that will be finalized on the 21st of November.

“I’m doing very well. I don’t have to open the door and be afraid of what’s coming next. I don’t have to wake up in the middle of the night for fear of going to sleep again, for being hurt. It’s a blessing and I couldn’t have done any of this without the resources of the Catherine Cobb shelter.”