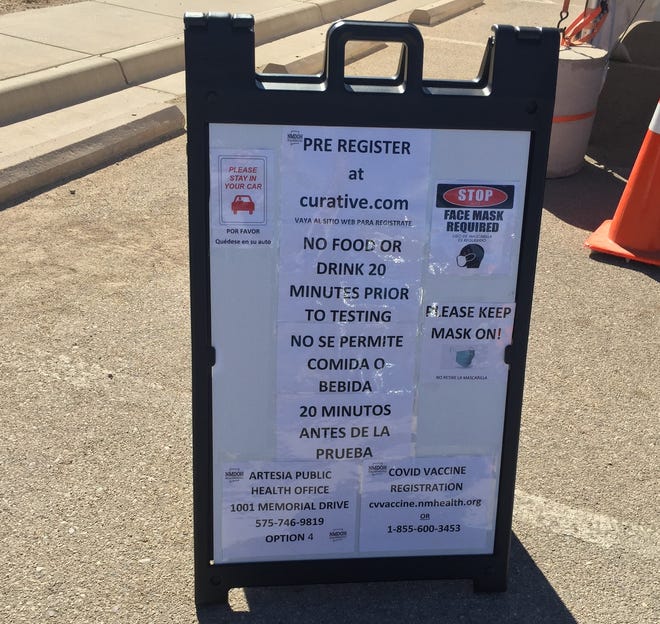 Chaves and Lea counties moved from red (very high risk) to yellow (high risk) Wednesday as the State of New Mexico adjusted rules of public health orders based on county-level prevalence of COVID-19 and test positivity.

Eddy County wasn’t as fortunate as its northern and eastern neighbors and was one of four New Mexico counties in red.

“I don’t know why there’s a disparity between Chaves County and Eddy County,” Kintigh said. “I don’t get it. Supposedly Chaves is in the yellow because our positivity rate on testing is below the five percent. I can’t confirm that independently, the data I’m looking shows number of cases the exceeds the 8 per 100,000. So, I did not expect us to make yellow.”

Kintigh said it’s going to be hard for Chaves County to get the green level, which is medium risk.

“Because of the size of our population we would have to average five cases per day for two weeks and the two-week period before yesterday (Wednesday) was some where around 10 cases, so we’d have to cut it in half,” he said.

“I don’t see how were going to get there to meet the governor’s requirements. But, she’s the governor,” Kintigh said.

Lea County State Rep. Randy Pettigrew (R-61) said anything that opens businesses and allows residents to make decisions on what they want “is a good thing.”

“This doesn’t do that. This still controls very specifically what can and can’t happen in the state and I think she (Gov. Michelle Lujan Grisham) overreaches when she does that,” he said.

Like Kintigh, Pettigrew doesn’t understand why Eddy County remained high risk. He said Lea County has made a big push to get people tested.

“To the point where there’s a multitude of people in Lea County that are getting tested twice a week,” he said. “They know they’re negative, but they keep testing because you’ve got to turn a ruler into a yard stick to make it work.”

State Sen. David Gallegos (R-41) represents Lea and Eddy counties and was perplexed by the figures as well.

“I just don’t understand it. Everything I saw in Lea and Eddy counties numbers were on the right on the right trajectory,” he said.

Gallegos said he couldn’t understand how Lujan Grisham was “doing the math” when it comes to COVID-19 figures in New Mexico.

Ward 3 Carlsbad City Councilor Jason Shirley said the State of New Mexico is taking major steps and it’s time to get the economy at full capacity.

“I’m happy to see a path forward beyond green, though I would like to have seen what complete reopening would look like. Other states have proven that there are responsible paths to full capacity sooner rather than later,” he said.

Shirley said Wednesday’s numbers were very close in getting Eddy County to yellow.

“But really close doesn’t help our restaurants who are fighting for their lives right now,” he said.

Janway said the increase in the number of vaccines being distributed and the significant downward trend in COVID-19 cases, The City of Carlsbad believes it is certainly past time for all New Mexico communities to be allowed to open much more significantly.