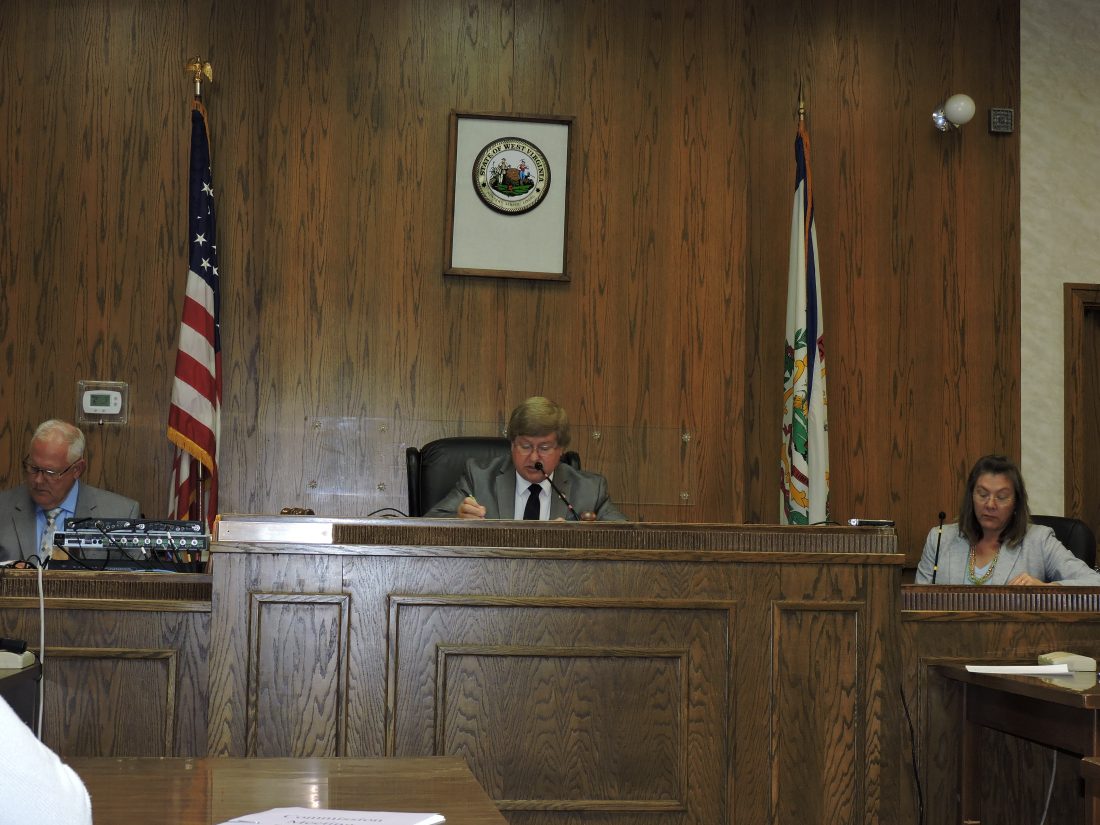 Craig Howell
DISCUSSION — The Hancock County Commission convened for its regular meeting Thursday in the county courthouse. Officials are discussing possible legal action concerning unused revenue from a previous levy in support of the county animal shelter. The matter will be considered during a special commission meeting next week.

NEW CUMBERLAND — The Hancock County Commission may soon be taking legal action over the use of unspent revenue derived from a former levy in support of the county’s animal shelter.

Near the end of Thursday’s regular commission meeting, Assistant County Prosecutor Mike Lucas, who serves as legal counsel for the commission, announced he would be bringing a request for the county to seek judicial approval for the use of approximately $300,000 raised through a shelter levy approved in 2016, the same year the commission decided to terminate its contract with the former Hancock County Animal Shelter Foundation to operate the county-owned shelter.

“I’ve been researching this for quite some time,” Lucas said, explaining the COVID-19 pandemic did delay some action, but he has been working with representatives of the West Virginia Auditor’s Office to see what is possible.

Lucas explained if the commission approves the measure, and if a judge agrees, the $300,000 would be put toward the current levy; in essence, meaning no additional revenue on the current levy would be collected from county taxpayers until the funds are spent.

West Virginia Attorney General Patrick Morrisey, in 2017, issued an opinion advising the commission to set aside and find a way to return the funds to the taxpayers.

In his 2017 opinion, Morrisey stated counties cannot use levy taxes for a private purpose; therefore, the non-profit animal shelter foundation “can no longer claim the remaining funds due to the termination of its contract.”

Furthermore, Morrisey stated in 2017, the levies “made no provisions for the county’s use of the funds in the event the non-profit ceased the run the shelter. That leaves Hancock County with no authority to spend the funds on its own shelter.”

Lucas, though, said he feels it would not be feasible to do a direct refund to residents.

“It’s going to be administratively and fiscally impossible,” he said.

In other business Thursday, the commission:

• Agreed to apply for grant funding through the West Virginia Courthouse Facilities Improvement Authority, with plans to use funds toward work on the courthouse roof.

• Approved a contract with Edmiston LLC for grant writing services, effective Thursday, at a cost of $14,500.

• Approved a letter of permission with the state Alcohol Beverage Control Administration to allow a private event, Hoot ‘N Annie in the Woods, to be held with the sale of alcohol on private property, on Aug. 20-22. Commission President Paul Cowey said the measure was a formality

as the commission is required to inform the WVABCA of such events.

• Approved the addition of a Certificate of Resolution to the county’s bond with United Bank.

(Howell can be contacted at [email protected], and followed via Twitter @CHowellWDT)