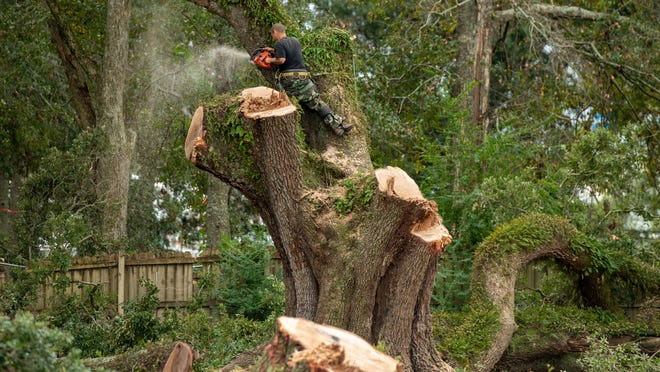 Escambia County is at the beginning of an ethics complaint investigation into Development Services Director Horace Jones over his handling of a heritage oak tree — the largest ever measured in the county — that was cut down at a future storage facility site despite an ongoing lawsuit attempting to halt the proceeding.

Resident Margaret Hostetter emailed county officials last week filing an ethics complaint against Jones, claiming he lied in saying that his staff had reviewed the development order that allowed the 85-inch diameter oak on the A+ Storage Palafox site to be cut down and questioning his actions leading up to the tree’s removal.

There was a pending appeal in Escambia County court on Oct. 30 when property owners moved forward with cutting down the tree. Attorney Will Dunaway, who is representing the plaintiffs Emerald Coastkeeper Inc. in the lawsuit, hand-delivered an emergency injunction to the worksite that same day to stop the work, but he arrived after all of the tree’s limbs had been removed.

A heritage tree is defined under the county’s land development code as any tree with a diameter of more than 60 inches and the code requires a tree “risk assessment” to be completed on its condition, health and viability before being removed. The 85-inch diameter live oak at A+ Storage Palafox, under that definition, is supposed to be subject to several additional steps to help preserve it and work with the developer on site plans to maintain it, but Hostetter claims that process wasn’t followed.

County staff approved removal of the tree during a Development Review Committee meeting in August, but a group of residents filed an appeal that was rejected in September. The issue has been ongoing in court since then to halt any further demolition of the trees until a judge’s decision.

The advocacy for this heritage tree has drawn dozens of supporters to Escambia County government meetings in the past few weeks as residents fight for tighter regulations on developers wanting to remove the historic trees in favor of new construction. An online petition to protect the tree had close to 6,000 signatures as of Monday afternoon.

There are six conditions under which heritage trees can be removed and, in this case, county staff said the tree met a condition that the intended use of the property cannot “reasonably be undertaken” with the tree in its location.

Jones said in August that the developer would need to pay just more than $24,000 in fees to remove the trees, which included $5,950 for the 85-inch tree and the remainder for 16 other smaller, but still protected, trees on site. Those remaining trees are the subject of the ongoing legal battle now that the heritage tree is gone.

Though advocates for the county’s heritage trees have been active since 2019 — the Facebook group “Trees of Escambia County Florida” has amassed more than 900 followers — the storage facility tree has caused a renewed interest due to its size.

County officials haven’t responded to a request for comment as of Monday afternoon, but county attorney Alison Rogers said at the Thursday county commission meeting that under the county’s rules, an email from a resident would initiate internal ethics investigations processes starting in the HR Department.