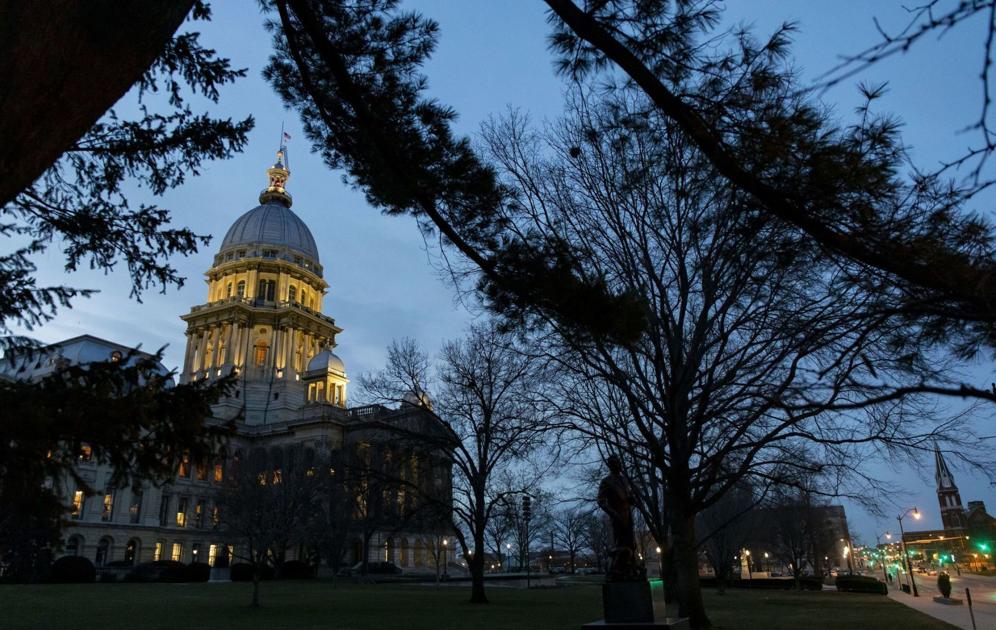 The language in a comprehensive energy bill aimed at moving Illinois to a carbon-free future has undergone a multitude of revisions, yet the foundation of equity within the bill has remained mostly untouched throughout the process.

Nearly 50 legislators identifying themselves as the “green caucus” expressed their motives in a letter to the governor — no climate, no equity, no deal — before the General Assembly its adjourned spring session at the end of May without any action on an energy bill.

Those motivations remain constant as negotiations are still ongoing, mostly in private working groups, even after a second failed attempt to pass an energy bill during a special two-day session in June.

The energy bill was held up again because an agreement could not be reached on the phasing out of coal and natural gas-fired power plants, while other prevailing wage related items remain in discussion as well.

It’s still unclear if, or when, a finalized version of the energy bill will be reached, but many equity advocates are cautiously optimistic that a compromise will be made before the end of the calendar year, while businesses groups are calling on the governor to slow the process down.

The importance of equity

Rep. Kam Buckner, a Chicago Democrat and chair of the House Black Caucus, is one of four other caucus members involved in the energy negotiations.

Buckner said the pandemic has highlighted the disparities that Black, indigenous and people of color, or BIPOC, communities face considering the disproportionate deaths and joblessness related to COVID-19.

“It’s important to me that we recognize that communities like mine have really borne the brunt of the health problems that have been associated with pollution as well,” Buckner said.

Rev. Tony Pierce, a community advocate and Black clean energy business owner, is part of the ongoing energy negotiations as well. Pierce also participated in negotiations that led to the Future Energy Jobs Act of 2016, which largely dictates how the renewable energy industry operates.

The passage of FEJA, which created a solar credit program funded by a charge on ratepayer bills, allowed Pierce’s Community Development Corp. to collaborate with Illinois Central College and the Tri-County Urban League to become one of the only designated training sites outside of Chicago within the official Illinois solar pipeline training network.

Pierce also worked with members of his church to form CTP-POWER LLC, a solar jobs training program. He said his company helps create living and prevailing wage solar jobs, especially for those that are chronically unemployed, which can include people with gang affiliation, drug issues or prison records.

He has learned from his experience in the clean energy industry that many BIPOC communities face barriers in the industry for a number of reasons.

“When it comes to a simple SWOT (strength, weakness, opportunities, threats) analysis, it shows that these companies that do green energy, solar, etc. are companies that are headed by typically young, highly trained people with technical backgrounds that have access to capital. Those two pieces typically don’t exist in any great fashion in BIPOC communities,” Pierce said.

The main focus of the equity provisions that are being considered include creating programs to promote economic opportunity and job growth for communities that have historically been left behind when it comes to the skilled labor industry, Pierce said.

The topic of prevailing wages continues to be a sticking point between labor unions and equity advocates as an agreement on how this will be addressed in the omnibus energy bill has yet to be met.

“The truth of the matter is that some trade unions have stood in the way of Black and brown workers and contractors sharing and the chance to earn jobs, to build businesses and to create generational wealth by controlling access to apprenticeships and other job training programs, especially in the energy and construction industries,” Buckner said.

“But we now have a chance to right that wrong. And that’s at the forefront of what we’re trying to do.”

Delmar Gillus, chief operating officer of Chicago-based Elevate, is one of the lead negotiators on the equity portion of a potential energy bill.

Along with being the board treasurer on the Illinois Environmental Council, Gillus has been an equity advocate in the negotiations, keeping an eye on everything from ratemaking to decarbonization, electrification to energy efficiency.

“All of these areas touch communities of color. And so it was important to make sure that those benefits reach everybody across the state,” Gillus said.

Gillus said that generally, most of those involved in the negotiations on the energy bill have been aligned in terms of equity goals. They differ more in how to implement certain things, he said.

Of the multiple energy proposals that have been introduced to the General Assembly, the Clean Energy Jobs Act is arguably the most equity-centric, according to the bill’s chief sponsor, Rep. Ann Williams, a Chicago Democrat.

“I think it’s fair to say that equity considerations really were woven throughout the entirety of the energy package that we are working on,” Williams said. “That was a priority that continued as we negotiated and discussed what we hope will be a final energy package.”

Gillus said that once FEJA was implemented, they were noticing structural barriers that needed improvement to ensure that BIPOC communities and contractors receive the material benefits from the clean energy economy, which CEJA intended to address.

CEJA, according to the Illinois Clean Jobs Coalition which backs it, was crafted with racial and socioeconomic equity at its core, creating programs designed to right these wrongs. Eventually, Gov. J.B. Pritzker’s administration introduced its own energy proposal, the Consumer and Climate First Act, which carried over much of CEJA’s equity intentions.

“I feel very good that many of the ideas that were part of CEJA, because they came up through the community, came from the groups that needed the help, in general were very well received,” Gillus added.

The coalition supports Pritzker’s proposal, calling it a bold, equity-centered plan that shares the goals, vision and values of CEJA.

While language in the latest draft of the comprehensive energy bill is subject to change, equity advocates said they believe for the most part that the equity provisions will go mostly untouched.

It is the intention of equity advocates to ensure the creation of climate workforce hubs, where nonprofit organizations are selected to participate in intermediary job training programs in the renewable energy industry.

These workforce hubs would help potential workers not only access good jobs, but receive the training, education, transportation, supplies and proper equipment necessary to achieve this.

Williams said it is also important and significant to her and many of her colleagues to ensure ownership and contractors for underserved communities are prioritized.

“That is woefully lacking in Illinois in the energy sector, and unfortunately in many sectors,” said Williams. “We’re looking to invest in business development grants as well as low cost, capital access programs…we call that a Green Bank.”

Efforts to increase and diversify investment for contractors and ownership opportunities for BIPOC communities can be seen through contractor incubators and accelerator programs.

There have been some questions about whether the equity measures will have “teeth” in ensuring it accomplishes what is intended. But Gillus said there are a number of accountability measures to do just that.

Demographic data will be collected across all of the programs within the bill which will allow for policymakers to assess how the programs are working. If the intended goals and targets are not being met, Gillus said, then they will work on adding more definitive measures.

“It’s almost like a carnival analogy, where it’s like you have to be this tall to ride this ride,” he said.

What that means, he explained, is that if a company is going to access renewable energy credits, which are paid into by Illinois ratepayers, then they have to be meeting minimum diversity requirements in order to access those incentives.

Gillus said if companies are not meeting equity requirements, a disparity study can be conducted to address any racial bias.

There could also be a dedicated block of incentives, or renewable energy credits, specifically for equity eligible companies, which primarily include BIPOC businesses and persons.

Gillus said FEJA programs resulted in many Black and brown contractors being blocked or locked out, making it difficult to access incentives for renewable energy businesses.

A Renewable Energy Credit carve out could address this barrier, allowing for small businesses, especially BIPOC businesses, to have access to a set of incentives that provides some market equity, Gillus said.

Gillus said while most equity provisions seem to be agreed upon, as legislators become more educated on the topic, alternative perspectives could arise.

“Now what I can say is that I have been very pleased with the support across the legislators that I’ve talked with on the provisions on the fact that they address a lot of the barriers that we talked about,” said Gillus.

“And I am very optimistic that they will remain in the final bill. But, you know, it is Springfield and things can change.”

The equity provisions, renewable energy investments, nuclear subsidies and low-income assistance programs, among other provisions in the energy bill, are largely funded through added charges to ratepayer bills. Cost breakdowns in some of the past public bill language show added costs of $3-4 monthly for the average residential ratepayer.

But a coalition of business groups and labor unions that are involved with maintenance at coal plants held a news conference last week questioning the transparency of ongoing energy negotiations and how extensive the impact will be on businesses. Illinois Manufacturers’ Association President and CEO Mark Denzler said businesses fear there may be a cost shift in future drafts of the bill, charging businesses $12 more monthly, with industrial charges increasing possibly over $1,900 monthly.

“Despite repeated requests, the governor’s office has failed to provide rate cost estimates, studies on reliability, or the impact on job loss from companies who will be asked to pay significantly higher electric bills,” Denzler said at a news conference.

In a statement, Jordan Abudayyeh, a spokesperson for Pritzker, cited Site Selection magazine’s recent ranking of Illinois as the top-ranked state in the nation for sustainability, based on a number of environmental factors.

Site Selection magazine publishes “information for expansion planning decision-makers,” according to its website, and Abudayyeh said the top ranking is “an important selling point to potential businesses looking to put roots down in a state that demonstrates its commitment to the environment and provides them opportunities to contribute to a clean energy future.”

“Bipartisan working groups have met dozens of times over the last year and convened key stakeholders to negotiate the various proposals made in the current draft of the energy bill,” Abudayyeh said. “The Governor has been clear that any energy legislation must address climate change by making meaningful progress toward moving Illinois to a renewable energy future while also protecting consumers, particularly low income consumers.”