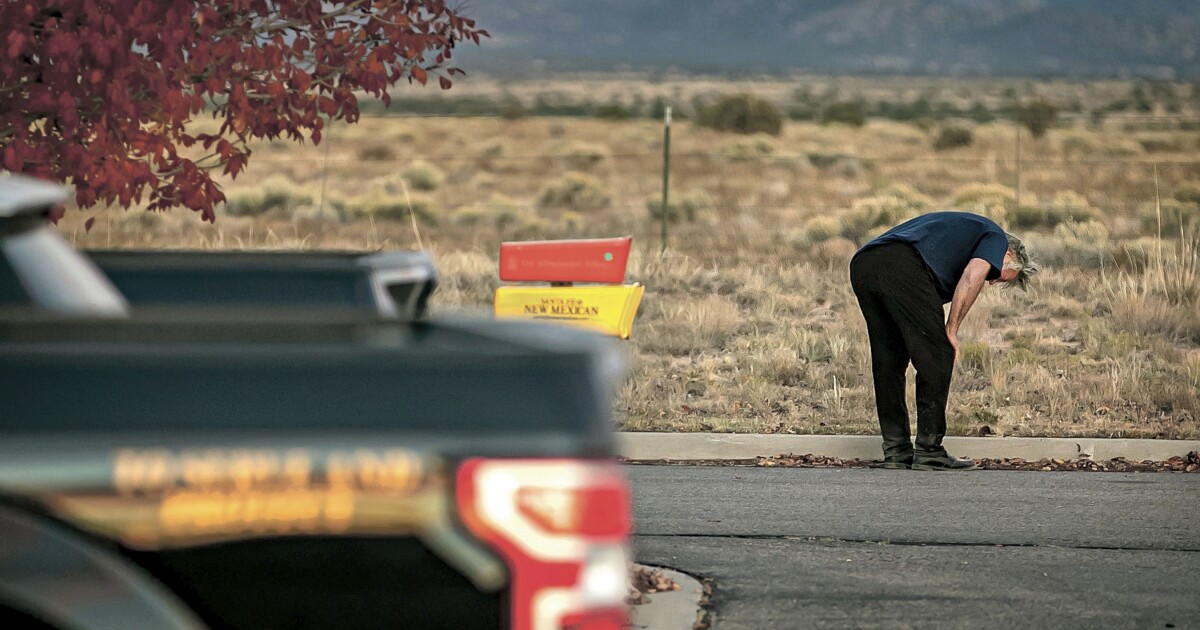 In his prime-time interview with ABC News anchor George Stephanopoulos, Alec Baldwin tried to convince the public that he was in no way to blame for the fatal shooting of cinematographer Halyna Hutchins on the set of the movie “Rust.”

But the decision to speak on national television during an active criminal investigation, and amid two civil lawsuits, was a highly risky tactic that could compound problems for Baldwin, according to several legal and public relations experts who spoke to The Times.

Former Assistant U.S. Attorney Neama Rahmani, who is co-founder of the Los Angeles-based firm West Coast Trial Lawyers, called the interview a “mistake” because Baldwin’s statements can be used against him in court but will be of no use for the defense.

“It’s really a no-upside situation, as far as the legal consequences are concerned,” Rahmani said. “His statements can be used against him; everyone knows that. But his statements can’t be used to help him in lieu of testifying because they’re hearsay. As an actor and as a public figure, there are nonlegal reasons to give an interview, but as an attorney, there’s no reason you should ever give an interview like that. It can only backfire.”

A spokeswoman for Baldwin did not immediately respond to a request for comment.

In the interview that aired Thursday, Baldwin said he does not expect to be criminally charged in the matter, though the investigation is ongoing. The Santa Fe County Sheriff’s Office has been scrutinizing the actions of Baldwin, as well as those of assistant director Dave Halls and armorer Hannah Gutierrez Reed, during its investigation into the Oct. 21 shooting that killed Hutchins and injured director Joel Souza.

“I’ve been told by people who are in the know and even inside the state that it’s highly unlikely I would be charged with anything criminally,” Baldwin said.

But officials have not ruled out charges against Baldwin. New Mexico First Judicial District Attorney Mary Carmack-Altwies on Friday said she has “not made a decision to charge or not charge any individuals involved in the shooting.”

“Everyone involved in the handling and use of firearms on the set had a duty to behave in a manner such that the safety of others was protected, and it appears that certain actions and inactions contributed to this outcome,” Carmack-Altwies said in a statement.

In the hourlong TV news special, Baldwin, who is also a producer on “Rust,” made the case that he should not be blamed for the Oct. 21 incident at the Bonanza Creek Ranch in New Mexico. He became emotional at times, breaking down in tears when talking about Hutchins and how she was admired by her peers.

Baldwin was holding a Colt .45 revolver during a marking rehearsal for the low-budget western when the prop gun discharged a live bullet that killed Hutchins and wounded Souza. During rehearsal, Halls handed the actor a revolver and told him, “This is a cold gun” — meaning the weapon was empty or contained dummy rounds, Baldwin said.

“Someone put a live bullet in a gun, a bullet that wasn’t even supposed to be on the property,” Baldwin added. “Someone is responsible for what happened, and I can’t say who that is, but I know it’s not me.”

Veteran Los Angeles criminal defense attorney Lara Yeretsian said Baldwin’s defense was rational and that his show of emotion was appropriate. Though it didn’t help his legal case, it probably didn’t hurt, according to Yeretsian.

“Generally, most criminal defense lawyers don’t want their clients doing interviews on ABC for the entire world to watch when there are potentially criminal charges coming their way,” said Yeretsian, who has represented celebrities including Michael Jackson and Scott Peterson. “But sometimes you know it’s not going to hurt, and I don’t think he said anything that’s going to come back to haunt him on the criminal end of it.”

But other legal experts said parts of Baldwin’s interview could become problematic for the actor, known for his roles in “30 Rock” and “Saturday Night Live.” Some have expressed skepticism at Baldwin’s statement that he didn’t pull the revolver’s trigger after pulling back its hammer.

To get the shot, Baldwin said he needed to cock the gun but not fire it.

Attorney Jeff Harris, who has worked on cases involving injuries and deaths on film and TV sets, said it would have been reasonable for Baldwin to believe that the gun was safe to use on set if he had been given assurances by crew members responsible for weapons. It would be unreasonable to expect an actor to check every round individually himself, Harris said.

But if investigators determine that the trigger was pulled, contrary to Baldwin’s statement, that could damage his credibility. If the single-action revolver was operating properly, it shouldn’t have fired without the trigger being pulled, said Harris, who is familiar with the type of weapon involved.

“Now you’ve gone on record stating how an event takes place that you’re going to have to live with,” Harris said. “It’s either an impossibility, or alternatively, if there’s a defect with the firearm, he’s going to have to come up with an expert who can replicate what he’s describing.”

The one-on-one with Stephanopoulos was the first formal interview Baldwin has given since Hutchins’ death.

Previously, Baldwin spoke to photographers who had been following him and his family in Vermont in late October. In a video of the encounter obtained by TMZ, Baldwin described the “Rust” team as “a very, very well-oiled crew shooting a film together” in New Mexico before “this horrible event happened.”

Baldwin last month again defended working conditions on the “Rust” set by sharing on Instagram what appeared to be social media posts of a crew member who said complaints on the set have been overblown.

“At every level, I think he’s managed this in ways that were out of control and impulsive and not strategic,” said Eric Schiffer, the Los Angeles-based chairman of Reputation Management Consultants.

First camera assistant Lane Luper and six other members of the camera crew resigned from “Rust” on Oct. 20, the night before the shooting, citing gun safety issues on set, a failure to receive paychecks and a lack of accommodations for people who lived in Albuquerque, about 50 miles from the ranch where the movie was being filmed.

Baldwin said in Thursday’s interview that he was not aware of complaints about safety problems on set. He said that the day before some crew members quit, he was alerted to issues with hotel rooms for the crew and that he was prepared to return a portion of his salary to help pay for rooms, but crew members did not show up the next day.

The actor also said he did not believe the set was sabotaged, in response to a question about a charge raised by Gutierrez Reed’s lawyer.

Rust Movie Productions said in a statement the day after Hutchins’ death that it was not aware of official safety complaints on set and that it was conducting its own review and cooperating with authorities. In a later statement, a representative for the production company said, “Luper’s allegations around safety are patently false.”