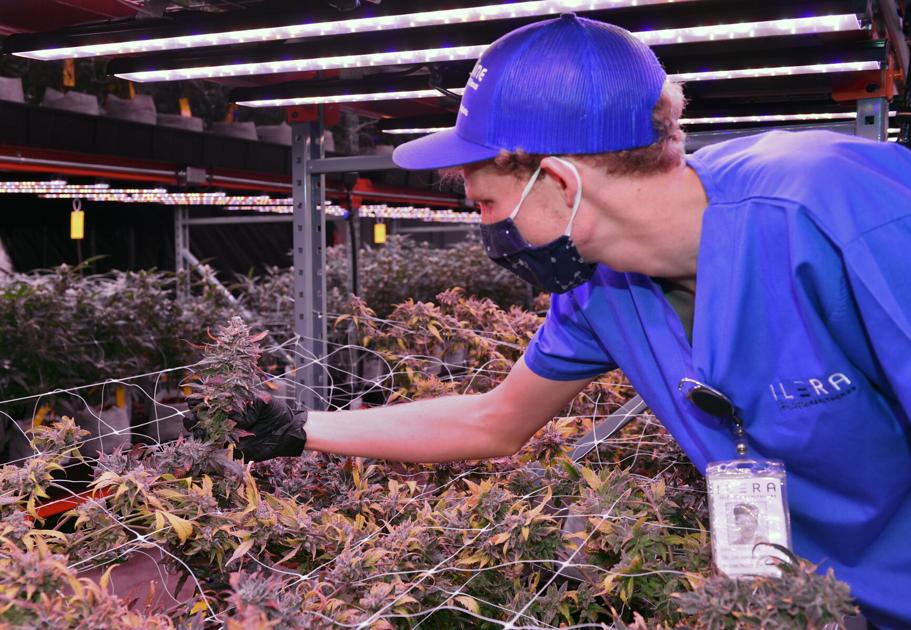 Six years ago, Louisiana became the first state in the Deep South to authorize a medical marijuana program, giving the state a head start over its neighbors in the rapidly growing market.

But to navigate the delicate political realities of legalizing medical marijuana in a deeply conservative state, lawmakers and regulators crafted some of the tightest rules in the nation for the program. For instance, the drug could only be produced by the agricultural centers of LSU and Southern University. They couldn’t sell it in its most popular form, which is smokable, and instead had to turn the plant into tinctures. Patients had to suffer from one of a number of specific serious diseases to access it.

Even though lawmakers have slowly loosened some of those rules, advocates now worry Louisiana will be left behind as other Southern states move ahead with more robust pot programs.

In the legislative session that begins Monday, lawmakers, marijuana companies and advocates are seeking the most significant expansion of Louisiana’s medical marijuana market to date. And attitudes across the political spectrum appear to be evolving in the Legislature, even if full legalization ends up being a bridge too far.

A key Republican, House Speaker Pro Tem Tanner Magee, of Houma, is sponsoring legislation to allow patients to buy the raw, smokable form of the plant. House Bill 391 would allow the nine pharmacies licensed by the state to dispense up to 2.5 ounces of the marijuana “flower” per patient every two weeks. He also filed House Bill 514 to make sales taxes apply to the smokable form of the drug and send the proceeds to fund transportation projects.

“This is where the South is headed, and we still have an opportunity to pioneer this in the South,” Magee said, noting Mississippi and Arkansas have already authorized smokable medical marijuana. “Or just like gaming, we can be behind Mississippi and let them reap all the rewards and then try to play catch up later.”

Democratic lawmakers have for years tried to also legalize marijuana for recreational use. As the push to loosen the medical marijuana program moves forward this year, those Democrats are now joined by a Republican — Rep. Richard Nelson of Covington — who has filed legislation to set up a referendum asking voters whether they want to legalize marijuana broadly.

Many Republican lawmakers — and the state’s most powerful Democrat, Gov. John Bel Edwards — have said they oppose recreational marijuana. In addition, some powerful law enforcement groups have for years opposed efforts to further liberalize the rules.

One of those groups, the Louisiana District Attorneys Association, still holds that view, executive director Loren Lampert said. But he added that medical marijuana is becoming less of a “visceral issue.” The group is still mulling the marijuana bills, he said, and he left the door open to the DAs voting to take a softer stance on the expansion of medical marijuana.

“I think initially the district attorneys are opposing the recreational legalization and smokable medical, but we are still in discussions on those topics,” he said.

The Louisiana Sheriffs Association hasn’t yet taken an official position on the bills yet, said Shannon Dirmann, the group’s attorney.

“Several members have recommended that we oppose (recreational marijuana) bills, although there has not been an official vote taken yet,” Dirmann said. “We will be discussing this bill and other legislation with our members at an upcoming meeting.”

Legal marijuana — whether for recreational or medical use — is popular among Louisiana residents, polls have consistently shown. And that support appears to be growing.

In 2019, the LSU Public Policy Research Lab did a statewide poll that found 55% of residents support legalizing small amounts of marijuana for recreational use, with huge generational divides. In polls conducted for a medical marijuana industry group in 2020 and 2021, pollster John Couvillon found support for legalization of medicinal and recreational pot jumped from 54% to 67% in a year, with near-unanimous support among the 18-34 age group this year.

In August 2019, medical marijuana became available to patients after years of delays since Sen. Fred Mills, R-Parks, ushered through legislation to authorize the program in 2015 and 2016. Since then, a total of 15,672 patients have gotten the drug as of March 31, according to records from the Louisiana Board of Pharmacy.

The number of patients, prescriptions and doctors in the program grew significantly after lawmakers agreed to allow doctors to recommend the drug for any patient they think it can help, last summer. It jumped again when LSU and its marijuana-growing partner Wellcana released its first batch of metered-dose inhalers, essentially vaporizers, into the market in December.

The Pharmacy Board data also cuts against some of the conventional wisdom about who uses medical marijuana.

As more states legalize marijuana for recreational use – New York became the 15th to do so on Wednesday when Gov. Andrew Cuomo signed a bill i…

Larry Bagley, the Republican chairman of the House Health & Welfare Committee, thinks lawmakers’ opinions about the drug are changing along with those of their constituents.

In fact, Bagley, of Stonewall, was among the conservative north Louisiana lawmakers who opposed medical marijuana when the Legislature debated it in 2016. But his position has softened, especially after hearing from people who benefitted from the drug.

Last year, he shepherded the bill to allow doctors to recommend the drug to any patient they think it could help, instead of only those with specified conditions.

“When I first came in, there was no way that’d get through (the Legislature),” he said.

Get the Louisiana politics insider details once a week from us. Sign up today.

‘The day will come’

Sen. Ronnie Johns, R-Lake Charles, said he hasn’t read Magee’s bill, but is in favor of medical marijuana. He also said opinions among lawmakers have changed as they saw the benefits of the drug.

But Johns isn’t ready to get on board with recreational marijuana, even if its day is coming.

“I’m 72 years old; I’m old school, I guess,” he said. “I guess the day will come when we will see a lot more support from it. I come from a conservative district…I’m there to represent my district and I don’t think my district is ready to support it at this time. In years to come, it may happen. The world changes every year.”

Louisiana is now one of at least 36 states with medical marijuana programs, according to the National Conference of State Legislatures. At least 18 states have legalized recreational marijuana, mostly through direct ballot initiatives.

Nelson, the Covington Republican, wants to take Louisiana’s marijuana laws beyond a robust medical program. His House Bill 524 would put a proposition on the Nov. 8, 2022 ballot asking voters in every parish if marijuana should be legal for people age 21 and up. If a parish voted it down but the state approved it, the parish would essentially be the equivalent of a dry county, with no marijuana sellers in the parish, he said. Louisiana recently did something similar with sports gambling.

The bill would also send a cut of the resulting tax revenue — which an accountant he worked with pegs at north of $100 million in the first year and nearly $1 billion over the first five years — to law enforcement agencies, among the most prominent opponents of legalization in Louisiana.

“I think it’s really a conservative issue,” Nelson said. “If you believe in individual liberty and free markets, limited government, this is kind of embodied in this issue. Throwing people in jail for buying and selling and smoking a plant is really antithetical to conservative values.”

As Nelson shopped his idea, many fellow Republicans conceded the drug’s legalization is “inevitable,” he said.

“This will be legalized one day,” Nelson said. “We’re delaying the inevitable and missing out on all the revenue in the meantime.”

Rep. Ted James, D-Baton Rouge, is chair of the House Administration of Criminal Justice Committee, which will hear the bill. He said he supports Nelson’s effort, saying Louisiana is “behind the times.”

Still, legalization of marijuana for recreational use will be a tough hill to climb in Louisiana’s Republican-dominated Legislature, especially if, as expected, law enforcement groups turn out to oppose it.

Lampert, of the LDAA, said law enforcement typically worries that legalizing recreational marijuana will lead to more traffic fatalities. He also contends there could be a “shadow crime component” where states that legalize marijuana but are surrounded by states where it’s still illegal see heightened black-market activity as people traffic it elsewhere.

Still, Lampert said the group “defers to the medical experts” on most medical marijuana issues.

“Traditionally we have opposed the smokable form, not because what we think the medical evidence shows, but because it makes the criminal (enforcement) side a lot more difficult. But I don’t know where they’ll land,” he said.

John Davis, president of LSU’s marijuana-growing partner Wellcana, said the medical marijuana market has grown since Bagley’s legislation passed and allowed doctors more leeway. And he attributes a recent spike in patients — the number of patients jumped 17% from November to December — to the release of the first vaporizers to pharmacies, where they flew off the shelves.

“When the patients receive the products that they want, that’s when we saw that jump in December,” he said. “When we rolled out the edible chews and the metered dose inhalers, that’s why they flew off the shelves. The patients want those products.”

He said the same is true of smokable medical marijuana, which is currently illegal in Louisiana. Instead, the law requires Wellcana to send the raw plant to a lab to extract chemical compounds from the flower, using expensive equipment. The liquid concentrate is then tested and diluted for different potencies to put into tinctures, edible chews and the inhalers. Those processes drive up costs.

LSU and Wellcana produced the bulk of the marijuana products sold to pharmacies last year, regulatory filings show. Southern University and its partner Ilera Holistic Healthcare, the other licensed grower, produced about 17% of the retail products shipped to pharmacies in 2020.

Chanda Macias, the CEO of Ilera, noted the group started producing in the middle of the pandemic and was a year behind LSU in production. She said the company is ready to expand its production if patient demand increases. and said it will soon release metered-dose inhalers as well.

The state law gave Southern and LSU a monopoly on growing in the state, as they hold the two exclusive licenses to produce marijuana products.

Now, Rep. Joe Marino, No Party-Gretna, has filed legislation to let the Jefferson Parish Economic Development Commission in on the action. The legislation, HB 472, would create a third license for JEDCO to grow marijuana and authorize research of the drug. Marino said JEDCO wants to start growing so it can partner with medical institutions to conduct research.

Dr. Victor Chou, one of the first doctors to start a clinic for medical marijuana patients in Louisiana, said he hasn’t developed an opinion on whether smokable marijuana should be allowed.

Marijuana products sold at Louisiana’s nine licensed pharmacies were expensive when they first came on the market in 2019, but Chou said the prices have steadily dropped and inhalers were immensely popular when they came on the market. Now, he’s as busy as he’s ever been, likely a result of the lower prices and looser rules.

“I think things are going in the right direction with all of this,” he said.