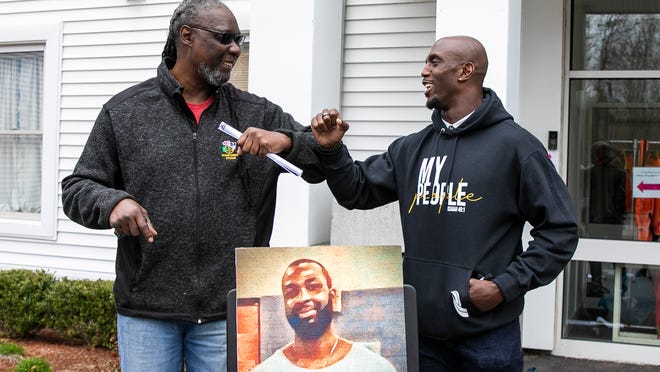 BROCKTON — William Allen has seen many visitors over Zoom from the Old Colony Correctional Center in Bridgewater since the COVID-19 pandemic began.

Most frequently, his father, Thurston Allen, will call and reminisce of when William Allen was just learning how to drive stick using his 1969 black Chevrolet van. Advocates will share articles and letters of support about or addressed to Allen. And attorneys brief him on the status of his case and instilling the hope of his release.

But a virtual visit by a man that was in grade school the last time William Allen was free to ride his father’s Chevy may provide the support Allen needs to be released from prison after serving 27 years.

“I saw a light in him despite the darkness around him,” McCourty said about his first interaction with William Allen over Zoom on April 6.

McCourty was briefed on William Allen’s case nearly a month ago after advocates from Massachusetts Communities Action Network, and its affiliate Brockton Interfaith Community, as well as Brockton Interfaith’s Second Chance Justice initiative, reached out to McCourty to see if he would be willing to get involved in Allen’s case.

“When I heard about his case, I said, ‘Yeah, this is something I want to get involved in,'” McCourty recalled.

William Allen was charged with first-degree felony murder in 1994 and sentenced to life in prison in 1997, as a result of being a joint venturer in an armed robbery of Purvis Bester. William Allen, who was with friend Roland Perry at the time of the robbery, was not present in the room when Bester was killed, but Perry was.

McCourty was contacted by Rahsaan Hall, director of the racial justice program of the ACLU Massachusetts on behalf of Massachusetts Communities Action Network, about William Allen’s case and immediately took the opportunity to get involved once the Patriots’ season ended in January.

“In order to get wheels of clemency going, we have to start with the people where it’s a no-brainer,” Hall said of Allen William’s case.

“When people like William are granted pardons or clemency it shows what advocates have been saying all along, which is that you don’t have to keep people locked up so long, and we can still be safe.”

While in prison, William Allen has worked the whole time, according to his legal team, and has served as a eucharist minister and altar server while in prison, as well as working with mentally ill inmates through the companion program at Bridgewater State Hospital.

According to Brockton Interfaith Community, “both the Department of Corrections and an independent evaluator have deemed Allen to be at a low risk for recidivism and violence.”

McCourty has used his platform in the past for social justice issues, including writing an opinion article in the Boston Globe, along with the Kraft family, about the need for juvenile criminal justice reform.

Through the help of Kristine McDonald, an attorney on William Allen’s legal team, he was able to read that article in 2018, which was one of the catalysts for McCourty’s involvement.

“He is a really strong advocate for justice reform,” McDonald said.

Working alongside William Dickerson, executive director of Brockton Interfaith Community, and Janine Carreiro, director of Massachusetts Communities Action Network, they were able to get in touch with Hall, who had known McCourty for years through criminal justice educational efforts at Harvard Law School in 2018, as well as Hall speaking to McCourty’s team about the history of racism after the killing of George Floyd.

In addition to using his own platform to advocate for William Allen’s clemency, McCourty will host a Zoom meeting at 6:30 p.m. on April 14, titled “Clemency Now,” along with Brockton Interfaith Community, and Second Chance Justice, an advocacy group created to spread awareness toward Allen William’s case and cases like his, as a time to learn about the commutation process, William Allen’s case and ways to help in his case.

McCourty encouraged everyone in attendance in person, and virtually, to understand the power of their platform and to use it to make change.

“Devin’s partnership will help elevate not only the importance of William’s case but the brokenness of the clemency process,” Carreiro said. “With his commitment, I think we will see William home soon. What it means for the state is one more voice calling loudly for change.”

In the past 25 years, there has only been a single use of commutation in Massachusetts, which was by former Gov. Deval Patrick in 2013, for a convicted cocaine dealer.

Brockton Interfaith Community is encouraging supporters to email or call Baker’s office and Gloriann Moroney, chair of the Massachusetts Parole Board, as well contacting their state representative or senator about William Allen’s case.

Enterprise staff writer Darvence Chery can be reached at [email protected]. Support local journalism by purchasing a digital or print subscription to The Enterprise today.