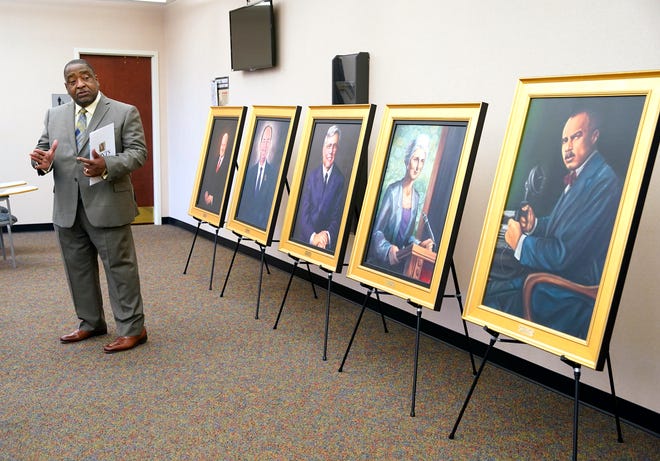 Portraits of five legal trailblazers will be on display at the Volusia County Courthouse in DeLand through Friday showcasing the diversity and determination they exemplified in their lives and careers.

The paintings of the legal pioneers were described by a trailblazer himself:  retired Judge Hubert Grimes, who was the first Black to serve as judge in Volusia County when he was elected to the county court in 1988. Grimes was later appointed circuit judge by then Gov. Jeb Bush.

The portraits were unveiled on Wednesday during a ceremony at the courthouse. The paintings depicted attorneys James Weldon Johnson, Anna Brenner Meyers, Larry Smith and James “Jim” Kracht and retired Judge Mario Goderich.

Johnson was among Florida’s first Black lawyers and also wrote Lift Every Voice and Sing, which has also been referred to as the Black National Anthem. Meyers was the first president of the Florida Association for Women Lawyers in 1951. Goderich was Florida’s first Hispanic judge in 1975. Smith was an openly gay attorney who worked on issues related to the LGBTQ community. Kracht was blind since birth and a leading lawyer on disability law.

Grimes said each of them faced challenges.

“So how do we say that we got problems?” Grimes said. “We should not, because that’s what they’re telling us, each of them in their own way are saying to us that no matter what the circumstances are, no matter the situation or difficulties that you have, have faith. I still believe two important things: have faith in God and put in the work.”

Grimes added: “Faith in God: that means you can do whatever you set your mind to. But the second part of that is you’ve got to put in the work.”

The Florida  Bar commissioned five college art students to paint the portraits as part of its ”Path to Unity”  a traveling history project telling the story of the “Florida Bar’s journey from a segregated past to the rich, multi-cultural public organization that it is today, according to a brochure about the exhibit.

The portraits will be on display through Friday in the first floor hallway of the DeLand courthouse across from the Boston Coffee.

Grimes focused his comments on Johnson. Grimes said that were it not for Johnson he might not have become a lawyer.

Grimes recalled Johnson was born in Jacksonville in 1871, was one of the first Blacks admitted to the Florida Bar and wrote Lift Every Voice and Sing. The song was set to music by Johnson’s brother, who was also from Jacksonville, Grimes said.

“We’re proud of that particularly because that song has now been picked up and is now referred to as the Black National Anthem, played at many events, many special occasions,” Grimes said. “And actually it’s been recommended in Congress that it becomes considered as the national hymn.”

Grimes added that many don’t know the song’s origin.

“It’s got something in there for everyone,” Grimes said, “because most people don’t understand it wasn’t written specifically for Black people. It was actually written as a poem to celebrate the life of Abraham Lincoln.”

Grimes said Johnson was the first Black after reconstruction to take the Florida bar exam, pass the exam, and to be admitted to the bar.

Chief Judge James Clayton said he got a call from Grimes asking for help displaying the portraits. Clayton said he was happy to be able to help with the project to bring attention to the five legal professionals..

Clayton introduced Grimes at the unveiling, saying Grimes was also a pioneer..

“In my opinion, Hugh is a true trailblazer here in Volusia County and in our circuit and what better person to introduce these portraits than Hugh Grimes.”

Grimes also took the time to mention another trailblazer who was not a lawyer but had a huge impact just the same: Dr. Mary McLeod Bethune, who founded Bethune-Cookman University in Daytona Beach.

A statue of Bethune is on display at the News-Journal Center. Grimes said people should take the time to look at the statue before it is moved to its permanent home at Statuary Hall in the U.S. Capitol Building in Washington, D.C. There is no admission fee to see the statue.

Grimes, who served as interim president of Bethune-Cookman University from 2017 to 2019, said he worked on the project to get the state Legislature to adopt Bethune as one of the representatives of the state of Florida.

“The sooner you get there the sooner you’ll appreciate it,” Grimes said of the seeing the statue. “And of course Dr. Bethune set an example for all of us. Talk about taking nothing. That was a garbage dump, the land that she purchased for $200, and turned it into what is now a college and a university.”

Here is more information about the Path to Unity honorees:

James Weldon Johnson:  In 1897, Johnson became one of the first African Americans to be admitted to the Florida Bar. Johnson wrote the words to Lift Every Voice and Sing, often referred to as the Black National Anthem. Johnson was a leader of the National Association for the Advancement of Colored People (NAACP ). He was also a writer, diplomat, social critic and civil rights advocate. Johnson was born in Jacksonville in 1871. He died in 1938.

Judge Mario Goderich: Goderich helped organize and was the first president of the Cuban American Bar Association, the first Hispanic Bar Association in Florida. Goderich became Florida’s first Hispanic judge in 1975, and its first Hispanic appellate judge in 1990. Goderich was born in Cuba around 1930 and practiced law in Havana until 1961 when he was forced to leave the country to avoid persecution under the Castro regime. He started over and graduated from the University of Miami School of Law in 1966 and started practicing three years later when he became a U.S. Citizen. Goderich retired from the bench in 2005.

James Kracht: Kracht has been blind since birth. He has been a tireless advocate for voting rights for people with disabilities and is widely considered a preeminent leader of disability law in Florida. Long before the Americans with Disabilities Act was passed and accessibility standards were in place, Kracht attended and graduated from Harvard University and then Harvard Law School. Nevertheless, it took him several years to find a job, leading him to a better understanding of discrimination and to work to solve accessibility and discrimination issues for others.

Anna Brenner Meyers: Meyers helped organize and was the first president of the Florida Association for Women Lawyers in 1951. Meyers was born in Poland in 1896 and immigrated to the United States as an infant. She first worked as a nurse and a teacher before entering law school in New York and graduating in 1934. She moved to Florida and was admitted to the Florida Bar in 1936. She used her voice to fight for the desegregation of schools and increased wages for teachers. Meyers died in 1983.

Larry Smith: Smith became the first openly gay attorney to address the Florida Bar about professionalism and diversity that included the LGBTQ community. And Smith did that long before the U.S. Supreme Court’s recognition of equality for LGBTQ citizens. Smith was born of modest means in Alabama and became the first in his family to graduate from college. He graduated from the University of Alabama Law School in 1984. Afterward, Smith moved to Florida and was admitted to the Florida Bar. Smith became a nationally respected spokesperson for diversity and inclusion. Smith is an attorney in Orlando.