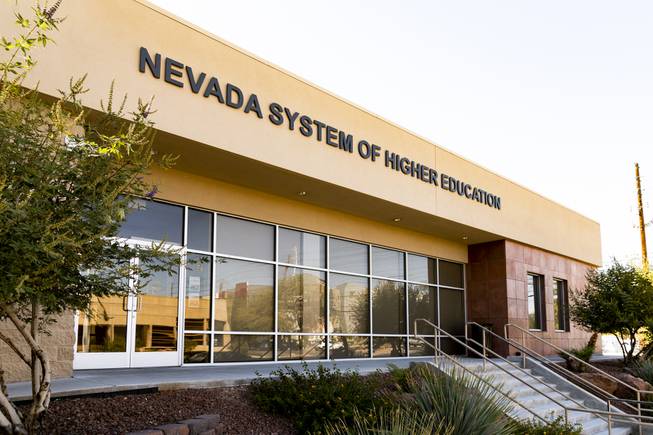 A view of the Nevada System of Higher Education building Thursday, Oct. 14, 2021.

When a city council wants legal advice, it turns to the city attorney. When a state agency needs a lawyer, it goes to the attorney general’s office.

This set-up is problematic for several reasons, and is a waste of taxpayers’ money. The regents, who are in the process of filling the vacant position, should instead call off the process and eliminate the position.

To understand why the regents should dump the job, first know that the structure of Nevada’s higher ed oversight system is a bit like a city council/city manager system, with the elected regents being like the council members and the chancellor of the Nevada System of Higher Education being like the city manager.

Having an attorney for both the elected board and the administrative system creates a situation where the two entities, which are structured to work together, can easily get crosswise amid conflicting legal advice.

It’s an exceedingly rare arrangement, for a reason. Having two separate attorneys perpetuates tensions within a government agency between the staff and elected body, creating a siloed structure that makes it more difficult for the administration and the governing body to work jointly for the betterment of the public and, in the regents’ case, the eight universities and colleges within NSHE.

This is ridiculous. Granted, there may be situations where it’s appropriate for the regents to get independent legal counsel, but in those cases the board should go to the state attorney general’s office — which it used to do — or hire outside counsel on a case-by-case basis. There’s no need for a full-time lawyer at a minimum of $180,000.

So why does the board have its own lawyer?

The answer speaks to a history of dysfunction, bad decision-making and oversteps of authority by the regents.

The wheels were set in motion while multimillionaire philanthropist Jim Rogers was serving as chancellor from 2005 to 2009. Rogers, a fierce advocate for higher education who donated his pay as chancellor back to the system, was a firebrand who managed the system as he saw fit and didn’t much care what the regents thought of it. In fact, he advocated for the regents to be appointed instead of elected.

You can imagine how this sat with the regents, a group prone to injuries to their fragile egos and forever desperate to retain their power. They hatched a plan to create the counsel position on the justification that they were getting questionable advice from NSHE/Rogers’ counsel, but the move had all the hallmarks of the regents arming themselves against the chancellor.

In the fall of 2009, three months after Rogers retired and Dan Klaich became chancellor, the regents created the position. No longer would they have to rely on NSHE’s counsel, and now they had their own attack dog to fight the chancellor’s office.

They did this, too, despite the fact that neither the state statutes that govern the higher ed oversight structure nor the regents’ own bylaws expressly allow for the hiring of a special counsel by the regents.

The state statutes regarding higher ed — Nevada Revised Statutes chapter 396, if you want to look them up — allow for the hiring of a secretary whose duties are limited to keeping “a full record of all proceedings of the Board.” There’s no provision in the statutes for a lawyer.

As for the regents’ bylaws, they allow for the hiring of a chief of staff who performs such duties providing notice of meetings to the board, assisting the chair in preparing for board meetings, being a custodian of documents and performing “all other duties normally incident to a corporate secretary.” Nowhere are legal duties mentioned.

The regents, though, couldn’t be bothered with these apparent limitations. They blew right past the statutes and their bylaws, and now are in the selection process for their third chief of staff/special counsel, following Scott Wasserman and Dean Gould.

The regents should pull the plug on this search, and schedule a vote instead to do away with their own special counsel.

This position simply shouldn’t exist. Having dueling attorneys in the higher ed oversight structure doesn’t serve anyone well, other than the regents and their immediate interests.