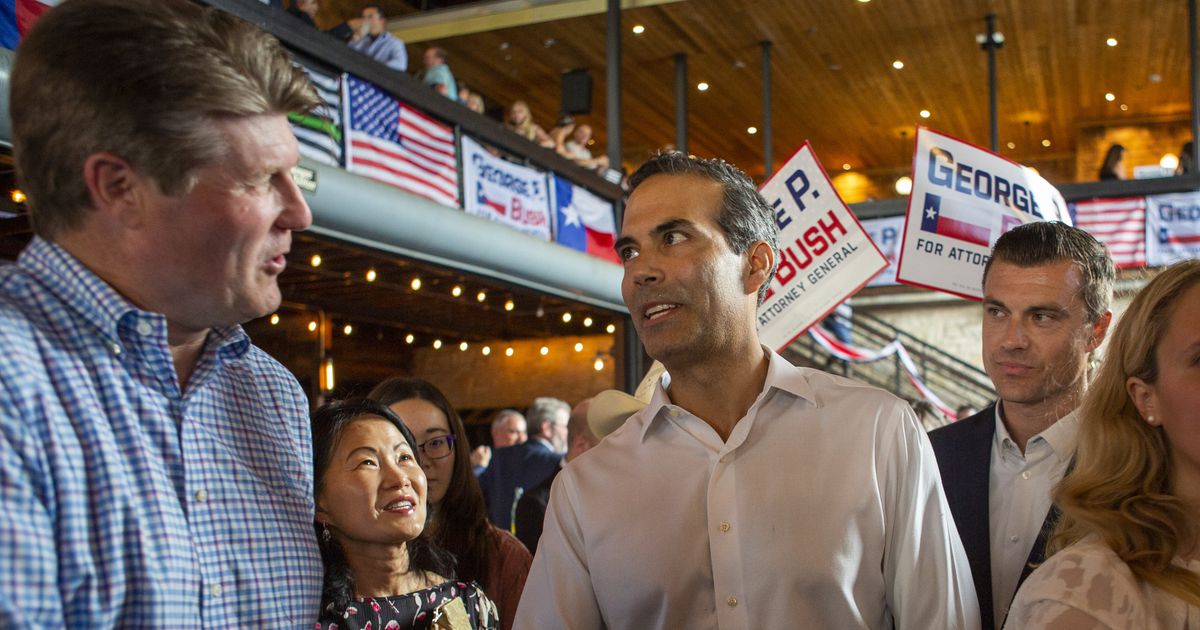 Updated at 8:35 p.m. with new information throughout.

AUSTIN — Land Commissioner George P. Bush announced Wednesday that he is running for Texas attorney general, kicking off what will almost certainly be a no-holds-barred GOP primary between the Bush family scion and embattled incumbent Ken Paxton.

“We have a web of corruption and lies that affect one of the highest offices in our land and it’s time for a change,” said Bush, who focused much of his brief speech Wednesday on Paxton’s legal woes. They include a nearly 6-year-old indictment on securities fraud and an FBI investigation launched last fall into abuse of office allegations. Paxton denies any wrongdoing.

As attorney general, Bush said his first goal would be securing the border, adding that restoring office morale and confronting human traffickers are also top of the list. A former teacher and Navy reservist, he earned his law degree at the University of Texas at Austin.

The attorney general’s office functions as the state’s legal department, mostly defending agencies from lawsuits, but leaders have also used it to launch politically motivated lawsuits against the federal government. Bush said Wednesday that Texas Democrats see Paxton as a “weak link” who is easily beatable.

“They know that if he is our nominee once again, they have their first statewide elected office in close to 30 years,” Bush said. Paxton, 58, has not faced a serious Republican challenge since winning his first term as attorney general in 2014. The conservative Christian who has centered his campaigns around protecting family values, won reelection in 2018 by one of the smallest margins of any statewide Republican.

“From defeating Joe Biden’s dangerous executive order halting deportations of illegal aliens, to his willingness to stand up for secure elections, Ken Paxton has been and will continue to be the tip of the spear in protecting President Trump’s America First principles,” spokesman Ian Prior said in a statement.

Trump looms large in the race. Already Paxton and Bush are competing for the former president’s endorsement, which carries sway with the state’s most conservative voters who typically turn out in primary elections.

On Wednesday, Bush said that all his life he’s been willing to “chart a different course” and offered as an example that he was the only member of his politically famous family to endorse Trump. His father, former Florida Gov. Jeb Bush, lost a bitter 2016 presidential primary to the businessman, and his uncle, former President George W. Bush, refused to say whether he voted for Trump last election.

“When we look at the Bush name, it’s still a great name to have in Texas, but it isn’t the gold standard of Texas Republican names anymore,” he said. “George P. Bush has done a good job bridging the gap between the old-school Bush and Donald Trump.” 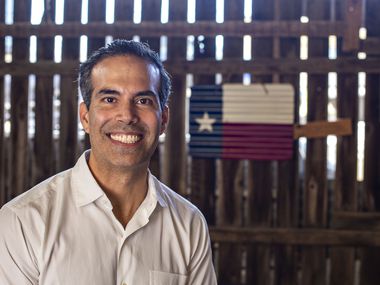 Bush, whose mother is a Mexican immigrant, has been an advocate for diversity in the Republican Party and seen as a bridge to expand its voter base. As a statewide official, he often took a lead in condemning hateful or racist rhetoric within the GOP.

His tenure at the relatively obscure General Land Office has been bumpy. Bush faced criticism over his handling of the major renovation of the Alamo historic site and recovery efforts after Hurricane Harvey. Within the last few weeks, elected officials in Houston and Harris County fumed at Bush’s office for failing to give them any of the $1 billion in federal funds earmarked for flood mitigation, according to the Houston Chronicle.

Still, in 2018 Bush beat back a primary challenge from the agency’s former leader and went on to win reelection as one of the highest-performing Republican statewide candidates that year.

Bush’s performance leading the General Land Office could prove fodder for Paxton, who has already poked Bush over his management of the Alamo. “He’s not going to run against me on the issues because he’s not competent to do the job,” Paxton said in an interview two weeks ago.

Bush is clearly courting a younger electorate in his bid to take on Paxton. At the downtown bar on Wednesday, which was decorated with Texas and “thin blue line” flags, Bush drew many 20- and 30-somethings who praised his integrity and willingness to boost young GOP candidates who are new to politics.

“He’s not afraid to stand up to corruption,” said Alma Perez, president of the Hidalgo County Young Republicans. “I support honesty over everything.”

On Thursday Bush is off to the Rio Grande Valley, a historically blue region he said will be “a strong part” of his campaign. South Texas delivered an unexpected boost to Trump last election.

It remains to be seen whether his father and uncle will hit the campaign trail on his behalf. They did not appear at Wednesday’s event, though Bush said he is in touch with both.

“They’re helping out wherever they can and giving their advice,” he said.

Bush also said he received “great advice” on how to approach the office from U.S. Sen. John Cornyn and Gov. Greg Abbott, both Republicans and former Texas attorneys general. Neither has made an endorsement.

Paxton already has a leg up in campaign cash, with $5.5 million in the bank, compared with Bush’s $1.8 million, according to campaign finance disclosures. But Paxton’s fundraising began drying up late last year, when the abuse of office allegations went public.