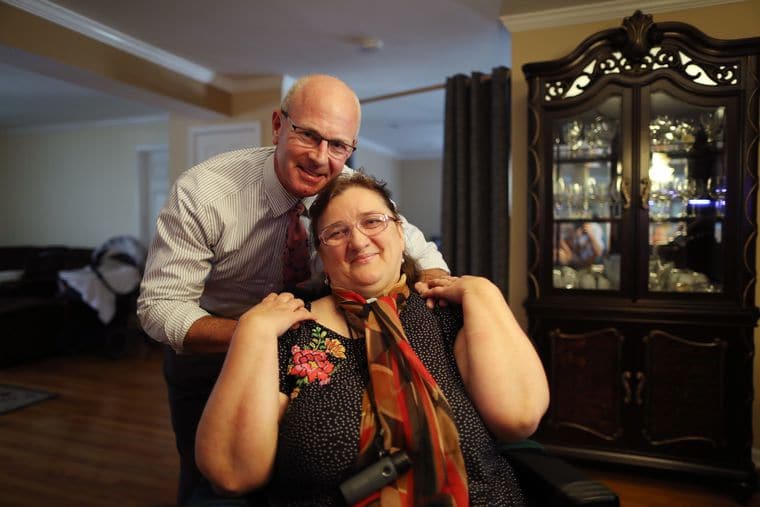 Andrew J. Stern, a powerhouse Philadelphia trial lawyer who helped win the largest personal injury settlement in Pennsylvania history, died Saturday after an accident at the Jersey Shore, his wife, Gwen, said in a Facebook post.

Police in Longport, N.J., said Saturday that Stern was believed to have fallen into the bay Friday night. He was rescued in Margate that evening and died of his injuries Saturday morning, police said.

Stern, 60, is survived by his wife and three children, Eric, 29; Jeff, 27; and Jen, 24. In a phone interview Saturday night, the family said they were devastated, and described Stern as a dedicated lawyer and consummate family man who, despite a caseload that included some of the most prominent trials in the city’s history, always made time for them.

“He was my best friend,” Gwen Stern said, through tears. “He was the most honest, ethical, respectful, brilliant, compassionate trial lawyer — and an incredible father who was always there, even though he had so much work to do. Every morning, we would have coffee together and talk for hours — about so many things. I was so excited to see him when he came down the stairs.”

Stern was a longtime partner at the Philadelphia law firm Kline & Specter, and had recently started a firm with Kline & Specter colleague Elizabeth Crawford. Founding his own firm had been a longtime professional goal, Gwen Stern said.

Stern often took on high-profile cases. He was lead trial lawyer in the case of victims who died in 2019 in the crash of Ethiopian Airlines Flight 302, a Boeing 737 Max, and he won a $100 million medical malpractice case in 2000.

In 2017, he represented Mariya Plekan — the woman trapped for 13 hours in rubble after the collapse of the Salvation Army store on Market Street in Center City in 2013 — in a civil suit over the collapse, which killed six people.

In total, the survivors of the collapse and families of the deceased received $227 million in a settlement, the largest ever in the state. Plekan, who suffered serious injuries, including the amputation of both her legs and ongoing breathing and kidney problems, received $95.6 million herself.

Later, with George Anastasia, a former Inquirer reporter, Stern published a book, Justice Under the Rubble, about his experience trying the case.

Anastasia said he’d been familiar with Stern, already a high-profile litigator, before they began working on the book, but got to know him better as they pieced together Stern’s recollections of the trial and his thoughts on the legal process that ultimately won his client a record settlement. He said he was struck by Stern’s care for Plekan — concern that went far beyond simply winning in court.

“It wasn’t so much the money — although he got her a lot of money,” Anastasia said. “It was about making sure that when she came out of this, she came out as whole as she could possibly be. [After the trial], he maintained contact with her, helped her out with her family … He was more than just her lawyer. He was her advocate in every sense of the word.”

Plekan died in February at 59 after battling COVID-19. In an interview with The Inquirer after her death, Stern called her “an inspiration.”

Intelligent, competitive, and sharp-witted, but with a self-effacing streak, Stern was “the kind of guy you could have a drink with,” Anastasia said. “He was genuine.”

“Andy doesn’t just look for the finished product — he gets personally invested in every single one of his cases,” said Crawford, whom Stern had mentored at Kline & Specter before they went into practice together. “He did everything to be able to achieve that — even if it meant doing things that were difficult. That’s what drives these record verdicts — they don’t just come from his pedigree or experience or knowledge. They come from his heart.”

Stern’s children said their father’s passionate nature wasn’t limited to the law. An avid fisherman, he rode dirtbikes and flew vintage planes as a hobby, and named both a boat and his vintage World War II-era airplane “Glamourous Gwen,” after his wife.

“My parents were so in love,” said Jen Stern, the couple’s youngest child. “It was like they were in their second month of dating. They were so good to each other, always.”

Stern’s children said his dedication to his work served as an example as they began their own careers. His son Jeff Stern said he encouraged the children to follow their own passions, “no matter what we wanted to do.” Jen Stern is studying law at Temple University, where her parents met during their own law studies.

“There was a while that I thought I didn’t want to go [to law school] — probably out of spite because both my parents were lawyers. But finally, when I decided that I did want to go, he just lit up,” she said. “He never, ever pressured me for a second. It was just really fun talking about really nerdy stuff with him.”

The news stunned Drexel University’s Kline School of Law, where Stern’s wife is a faculty member and where the couple had been major donors.

”There’s a palpable sadness throughout the whole faculty and staff community,” said Daniel Filler, the law school dean. “This is a really big loss. It’s really the sensation of a bright light going out.”

The Sterns in 2019 gave $1.65 million to the law school’s community lawyering clinic, and it was named after them. But they did more than give money, Filler said. They helped out at the clinic, which serves the Powelton and Mantua neighborhoods, working with students and clients.

”Both Gwen and Andy, especially Andy, have thrown themselves into the work on behalf of clients at the clinic and played a real hands-on role in helping students prepare cases for trial and helping them think things through to make sure clients got the best outcomes,” Filler said.

In the last couple of weeks, Stern’s firm had agreed to take on a case pro bono that had come to the clinic, Filler said.

Tom Kline, for whom Drexel’s law school is named, knew Stern for decades, after first working with him at the Beasley firm and then at his own firm, Kline & Specter. He called Stern’s death “a very stunning and deep loss to the legal community.”