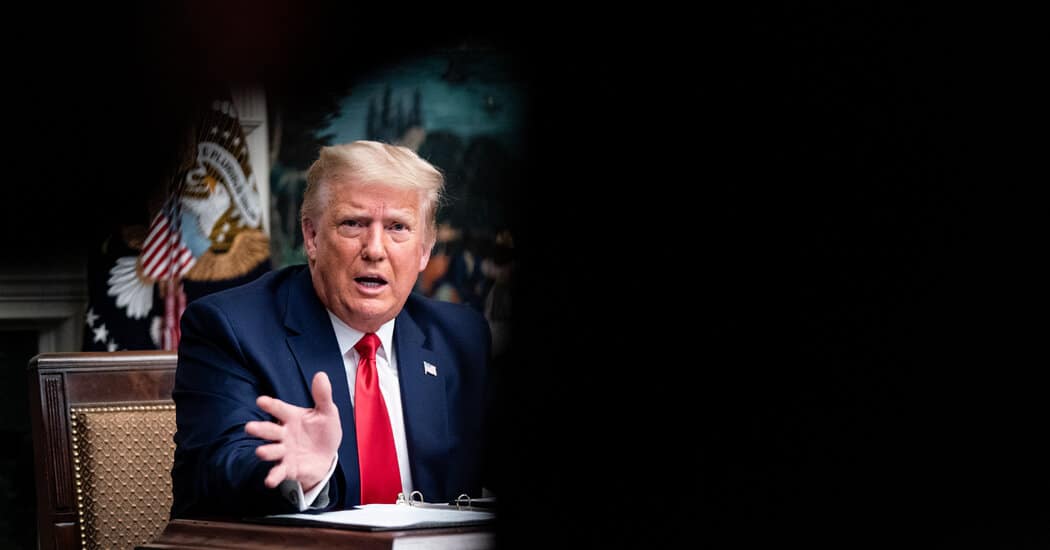 Donald J. Trump filed a lawsuit on Monday against the New York State attorney general, Letitia James, seeking to halt her long-running civil inquiry into his business practices and to bar her from participating in a separate criminal investigation.

The suit, filed in federal court in Albany by Mr. Trump and his family real estate business, argued that Ms. James’s involvement in both inquiries was entirely politically motivated, a tack that Mr. Trump has deployed in the past when faced with scrutiny by law enforcement and others.

The lawsuit cited a long list of Ms. James’s public attacks on Mr. Trump in the past, including while she was running for office, to argue that she had violated the former president’s constitutional rights. “Her mission is guided solely by political animus and a desire to harass, intimidate, and retaliate against a private citizen who she views as a political opponent,” it read.

In a statement, Ms. James, a Democrat, said the suit would not deter her inquiry.

Mr. Trump faces a high bar in proving that Ms. James violated his rights, according to legal experts, some of whom predicted that Ms. James would prevail even if a judge concluded that her comments were inappropriate.

The former president previously argued that he was the victim of political harassment when he tried to challenge a criminal investigation by the Manhattan district attorney, Cyrus R. Vance Jr., also a Democrat.

That fight, over a subpoena for the former president’s tax returns, significantly delayed the investigation, before Mr. Trump’s argument was ultimately rejected by the Supreme Court in February.

In a statement on Monday, Mr. Trump addressed Ms. James directly, calling her investigation “a continuation of the political witch hunt that has gone on against me.”

“This is not about delay, this is about our Constitution!” the statement said.

Mr. Vance’s criminal investigation, which Ms. James’s office is assisting, is centered on whether Mr. Trump fraudulently inflated the value of his assets to dupe banks into providing him with loans.

The investigation recently reached a critical phase, with prosecutors questioning one of the former president’s accountants before a grand jury.

Mr. Vance is leaving office at the end of the year, but if prosecutors in his office conclude that Mr. Trump committed a crime, they could eventually seek to indict him. That decision would likely fall to Mr. Vance’s successor, Alvin Bragg.

Danny Frost, a spokesman for Mr. Vance’s office, declined to comment on the lawsuit.

Ms. James’s parallel civil investigation began in March 2019 and focuses on similar questions about the way in which Mr. Trump valued his properties. If Ms. James were to find evidence of wrongdoing, she could file a lawsuit against Mr. Trump, but because it is a civil inquiry, she could not file criminal charges.

Mr. Trump’s lawsuit comes less than two weeks after Ms. James signaled that she would seek to question him under oath early next month. The former president’s lawyers said at the time that they would ask a judge to quash the subpoena, and they are still expected to do so in the coming days.

A lawyer for Mr. Trump, Alina Habba, said in a statement on Monday that the lawsuit was an effort to stop Ms. James’s “bitter crusade to punish her political opponent in its tracks.”

The lawsuit highlighted public criticism that Ms. James has leveled at Mr. Trump over the years, including a 2017 tweet declaring that she was “leading the resistance against Donald Trump in NYC.”

Mr. Trump’s lawyers contend that Ms. James, the New York City public advocate at the time, campaigned for attorney general in part on an anti-Trump agenda.

During her campaign, Ms. James often invoked Mr. Trump on Twitter and in fund-raising appeals. And after being elected, Ms. James redoubled her attacks on Mr. Trump, the lawsuit argued.

“We’re going to definitely sue him,” she said in a video posted the day after her win, in November 2018. “We’re going to be a real pain in the ass. He’s going to know my name personally.”

Numerous inquiries. Since former President Donald Trump left office, there have been many investigations and inquiries into his businesses and personal affairs. Here’s a list of those ongoing:

Investigation into tax evasion. As part of their investigation, in July 2021, the Manhattan district attorney’s office charged the Trump Organization and its chief financial officer with orchestrating a 15-year scheme to evade taxes. A trial in that case is scheduled for summer 2022.

Ms. James recently dropped out of the race for New York governor, citing “a number of important investigations and cases” that she said she intended to continue as attorney general.

The lawsuit argues that Ms. James’s public attacks on Mr. Trump — and the bevy of subpoenas she has issued to his company — violated a number of Mr. Trump’s constitutional rights, including his right to due process and free speech.

While the lawsuit might delay or distract from Ms. James’s investigation, a judge is unlikely to halt it altogether, experts in civil rights law said. There is no constitutional protection against a prosecutor harboring a political bias, the experts said.

Mr. Trump can challenge any particular subpoena as overly broad or unfair, but when he has done so in the past, judges have ruled against him.

Jonathan M. Smith, the executive director for the Washington Lawyers’ Committee for Civil Rights and Urban Affairs, said in an interview that he did not expect a court to be swayed by most of Mr. Trump’s constitutional arguments, and that the lawsuit was unlikely to delay Mr. Vance’s criminal investigation.

“Even if she has political beliefs about Trump, there are legitimate claims that have been raised about the conduct of the Trump Organization and Trump himself that would justify the investigations,” Mr. Smith said.

He noted, however, that prosecutors are ethically bound to set aside any bias when pursuing a case. He said the strongest argument Mr. Trump’s lawyers appeared to be making was that Ms. James had essentially abused her office in violation of the law.

“The abuse of process is the one that I think comes closest,” Mr. Smith said. “If they can actually show that her purpose is retaliatory or politically motivated, that violates the ethics rules.”